Food Supply Under the Pandemic

The Role of Tech in the Great Resignation

The pandemic has caused a global job crisis, as many people lost their primary source of income during the first wave of the virus. However, having survived the first, second, and third waves of COVID-19, people began to dwell on the “what ifs,” leading them to the conclusion that they wanted more out of life; their jobs were limiting their potentials, and other factors, resulting in a socioeconomic twist, particularly in the US labor market, as people quit their jobs en masse. 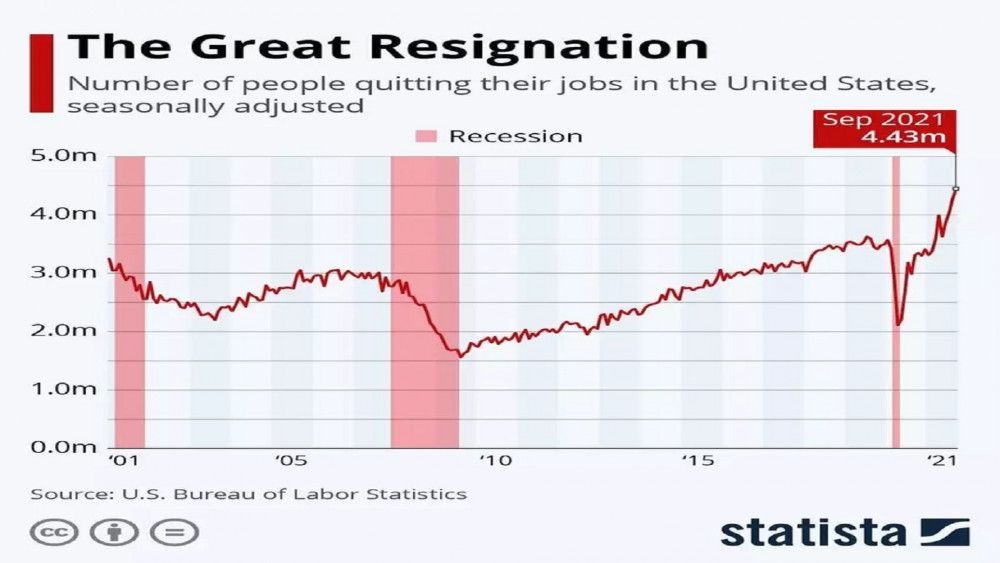 According to Statista, 4.43 million Americans left their jobs in September and 4.3 million in the previous month, leading to the trend of what is now known as the “Great Resignation.” This rate is reportedly higher in hospitality, healthcare, and retail because of the high exposure risk. Though it was cited that stimulus checks to citizens and an increase in remote work opportunities are major drivers of this trend, the latter was a bigger driver. Technology has made it possible for job automation, also known as remote work, as multiple waves of COVID-19 have made it nearly impossible for physical resumption at worksites and offices.

Technology, as a factor for the Great Resignation trend, can also be re-tuned to bolster the global workforce in the following ways:

The best way to fill the vacuum created by the Great Resignation is using technology to create a central database that can match citizens with physical roles where there are employee shortages, because every economy has underemployment and unemployment issues, albeit more serious than the other.

Also, data shows resignations are highest among mid-career employees, which disrupts the chain of command, but tech companies can create online courses for junior staff to get the certifications required to fill these senior roles and re-balance the chain of command.

Tech companies can also look inwards at sectors that are affected by the recent trend and create new demands for these sectors. For instance, health and domestic robots have become a necessity to replace human labor and reduce the rate of casualties during disease outbreaks. Meanwhile, technology and digital media can be utilized to create a virtual office setting where coworkers can communicate and boost work efficiency, which is more advanced than Zoom, Google Meet, Microsoft Teams, Slack, or Notion.

The "Great Resignation" trend has also sparked the "Great Hire" trend, as employees sought a more dependable job that provided them with greater compensation, flexible hours, and fulfillment, the majority of which were found in tech jobs. In fact, the value market created by the trend has encouraged the importation of talents from other countries. Companies should thus focus on opening up roles that give room for infusing more requisite talents through migration or remote work.

The pandemic has sprung technology to reveal the opportunities available in the global future of jobs. All that we have left is to re-align corporate, social, economic, and political goals with this posterity as it grows.

How Robotics Process Automation Is Changing Business in Italy and Worldwide

The UK Seeks to Break Down Digital Trade Barriers